Just like the Sennheiser Momentum True Wireless 3s I recently reviewed, Beyerdynamic’s new Free Byrd earbuds are squarely aimed at those who prioritize sound quality over almost everything else. When you consider that these are the company’s first-ever set of true wireless earbuds, I’ve been pleasantly surprised at how well they also stand out in other respects: the $249 Free Byrds deliver marathon battery life, good active noise cancellation, and have a design that breaks from the standard, unmemorable formula.

Great sound quality is just the starting point of an impressive first effort. And I can’t ignore the name, which is clearly a nod to the Lynyrd Skynyrd classic — and a very cliche concert request. But no set of earbuds is perfect, and the Free Byrds are brought down somewhat by unintuitive controls and a physical design that might prove troublesome for smaller ears. 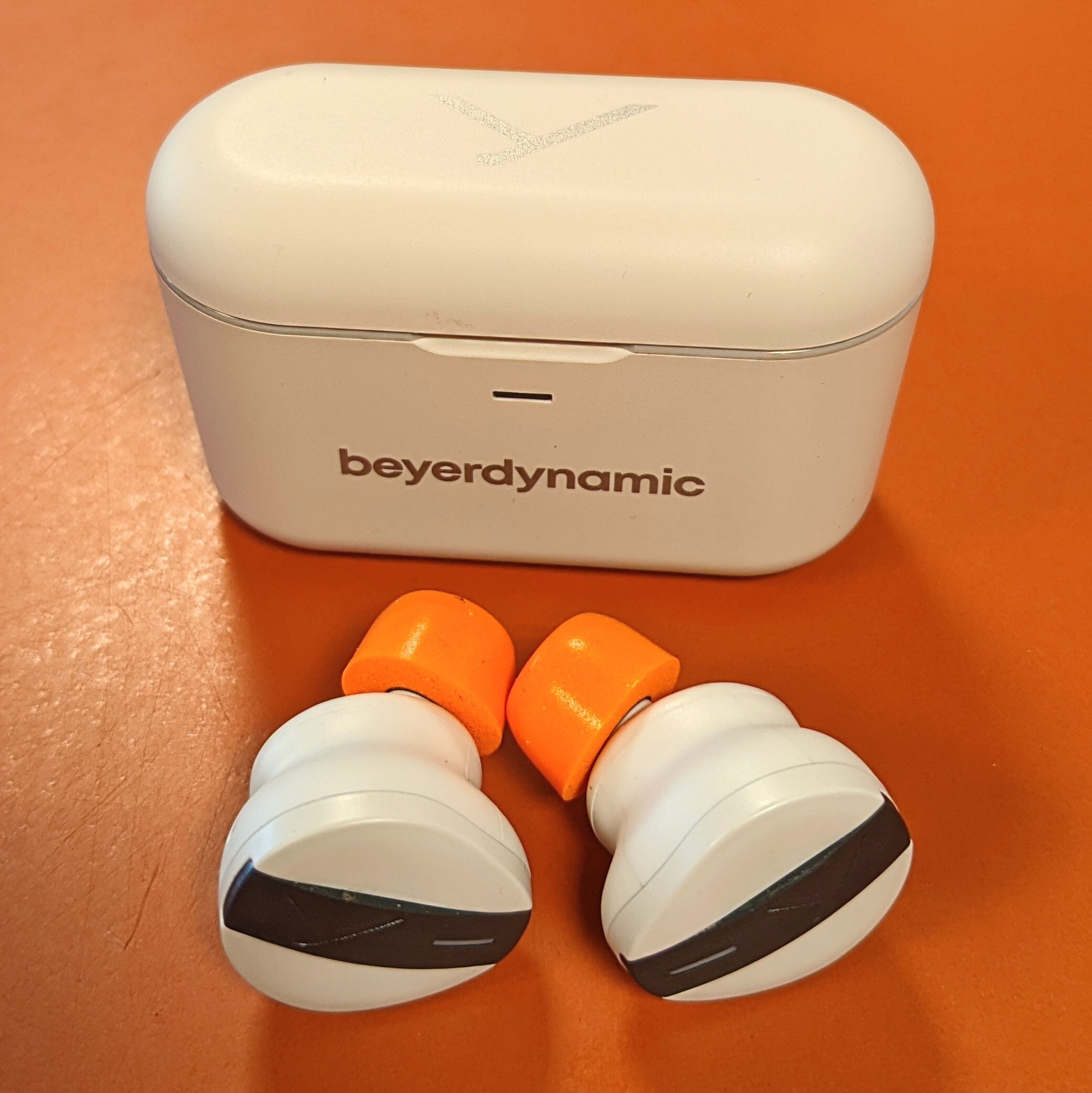 The Free Byrds aren’t small or understated. They weigh a hair less than Sony’s 1000XM4 earbuds but are a good deal heavier than the Samsung Galaxy Buds 2, Apple AirPods Pro, and other earbuds that provide an airy feel and prolonged comfort. Beyerdynamic’s buds are more chunky by comparison, and in particular, there’s a bulbous middle area of the earbud design that might make the Free Byrds uncomfortable in small ears. I don’t fit that description, so I never experienced any soreness or ear fatigue.

I should have expected as much from an audio brand, but Beyerdynamic includes a generous collection of ear tips with the Free Byrds. There are five sets of silicone tips to choose between (XS, S, M, L, XL) and three pairs of foam-style tips. I always gravitate toward foam when available, and there’s something about the light gray finish of the earbuds combined with the orange foam ear tips that looks great. Tell me you’re an audiophile without telling me you’re an audiophile — that’s the kind of vibe these project. (The Free Byrds also come in black.) The wireless charging case is on the taller side but feels well made. I haven’t had any instances of these earbuds remaining connected while in the case, which is something I’ve encountered more and more from the Sennheiser Momentum True Wireless 3s post-review.

Sound quality is detailed and crisp but doesn’t go shy on bass. But there’s no muddiness or harshness anywhere in the frequency range. On Maggie Rogers’ new song “Horses,” her vocals come through clearly with warmth and resonance, while the crunchiness of electric guitars underneath is well-preserved. Muna’s “Loose Garment” is a nice demo track for the soundstage, with vocals and strings floating between the left and right channels during the song, and the drums and cymbal taps are still perfectly distinct with their own spot in the mix. Everything about the Free Byrds feels engaging and refined. With Beyerdynamic’s mobile app, you can take a hearing test to personalize the sound profile or choose from presets like “warm” or “v-shaped,” but there’s currently no way to completely customize the EQ. Overall, I still prefer the fidelity of Sennheiser’s latest pair over these, but they’re not wildly far apart.

For codecs, these Bluetooth 5.2 earbuds support aptX Adaptive on Android — allowing for higher-bitrate wireless playback — and the standard AAC on Apple devices. Unfortunately, they don’t offer multipoint Bluetooth for pairing with two audio sources at once, but handoff between devices is very quick and doesn’t require disconnecting from one source before you can switch to another. The Free Byrds do include support for Fast Pair on Android, optional Alexa integration, and you can use either bud standalone in mono. There’s also a low latency mode that can be activated when playing mobile games, and the Free Byrds are rated IPX4 for water resistance, making them suitable for exercise.

Active noise cancellation on the Free Byrds is above average, if not quite on the level of Sony, Bose, or Apple. There’s a very faint hiss that you might pick up on in totally quiet environments. Some people are more sensitive to this than others, and I never noticed it when audio was actually playing. Transparency mode is a little more run of the mill but serves its purpose if you need a quick check-in with the outside world. Call quality is satisfactory but not mind-blowing; Beyerdynamic favors letting more of your voice through without aggressively gating it to cut down on background noise. This works well on calls at home but is less ideal outdoors.

Beyerdynamic’s touch controls could use some revising, however. I prefer physical buttons where possible but can settle for tap gestures as long as they make sense and work consistently. The basic Free Byrd commands are fine: you tap once to play or pause, twice to switch between ANC and transparency mode, or three times to skip tracks or go back. Volume is where things get a little awkward, requiring two taps and a hold after the second one to adjust loudness. It works okay once you get the sequence down, but it’s not what I’d call an intuitive gesture — and I’d occasionally pause the music by mistake those times when I didn’t nail it. It’d be nice if you could customize each of these gestures to your preference, but that’s not possible at the moment.

Battery life is an unexpected strength, with the Free Byrds able to reach around eight hours of playing time with ANC enabled and up to 11 with it off. That’s more than enough for most needs, and the charging case provides an added 19 hours (with ANC disabled), so you can potentially reach a total of 30 hours in scenarios where you don’t require the noise cancellation.

For the company’s first swing, Beyerdynamic’s Free Byrd earbuds deliver fantastic sound with detail and depth, top-tier battery life, and good noise cancellation. I appreciate the overabundance of ear tips that come included, and at least for my ears, they fit well and stayed comfortable over time. But that last point will differ for every person, and I can foresee cases where these earbuds will be a little too stout for some. What’s here is a strong debut in the wireless earbuds market for an established audio brand. I recommend the Free Byrds as they are as long as your ears are the right match. But with some refinements to the onboard controls and maybe a smaller form factor next time around, Beyerdynamic will be right up there with the very best players in the game. That’s assuming, unlike in the song, this Byrd can change.

Photography by Chris Welch / The Verge

Don't Miss: Find out about the handshake, humanity's oldest

How to clear cache on your Android device