Apple has reported record-breaking results for the March quarter. Here’s how the company’s Q2 2022 stacks up versus the company’s previous quarters and years.

The iPhone maker’s performance during the March quarter marked its best Q2 yet.” Apple CEO Tim Cook said that the period serves as a “testament to Apple’s relentless focus on innovation and our ability to create the best products and services in the world.”

Apple reported quarterly reverie of $97.3 billion, beating out Wall Street’s consensus expectations of $94 billion. That is also despite ongoing supply shortages and a shift in consumer behavior as pandemic-era restrictions ease in many locations.

Here’s what the quarter looks like in numbers compared to previous earnings results. 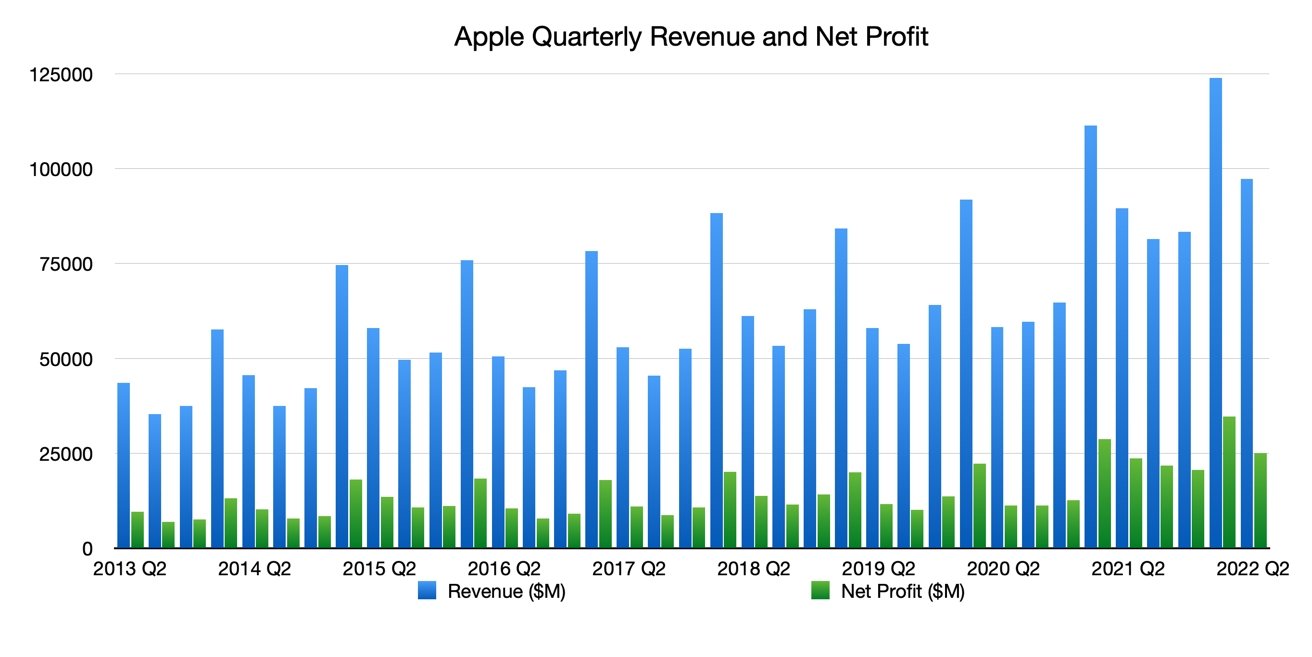 The company’s net profit of $25 billion also beat out the $23.6 billion it reported in the year-ago quarter. 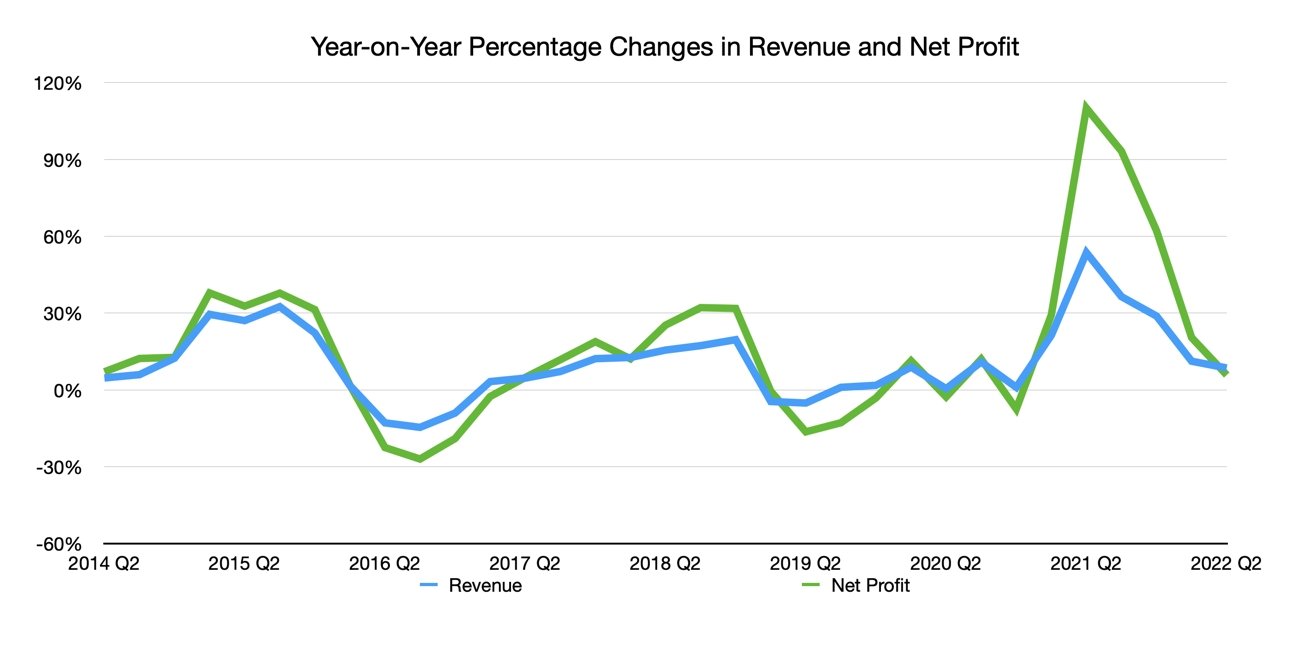 Apple’s gross margin, which refers to the net sales minus the cost of goods sold, reached 43.7% in Q2 2022. Gross margins are generally a good sign of profitability. 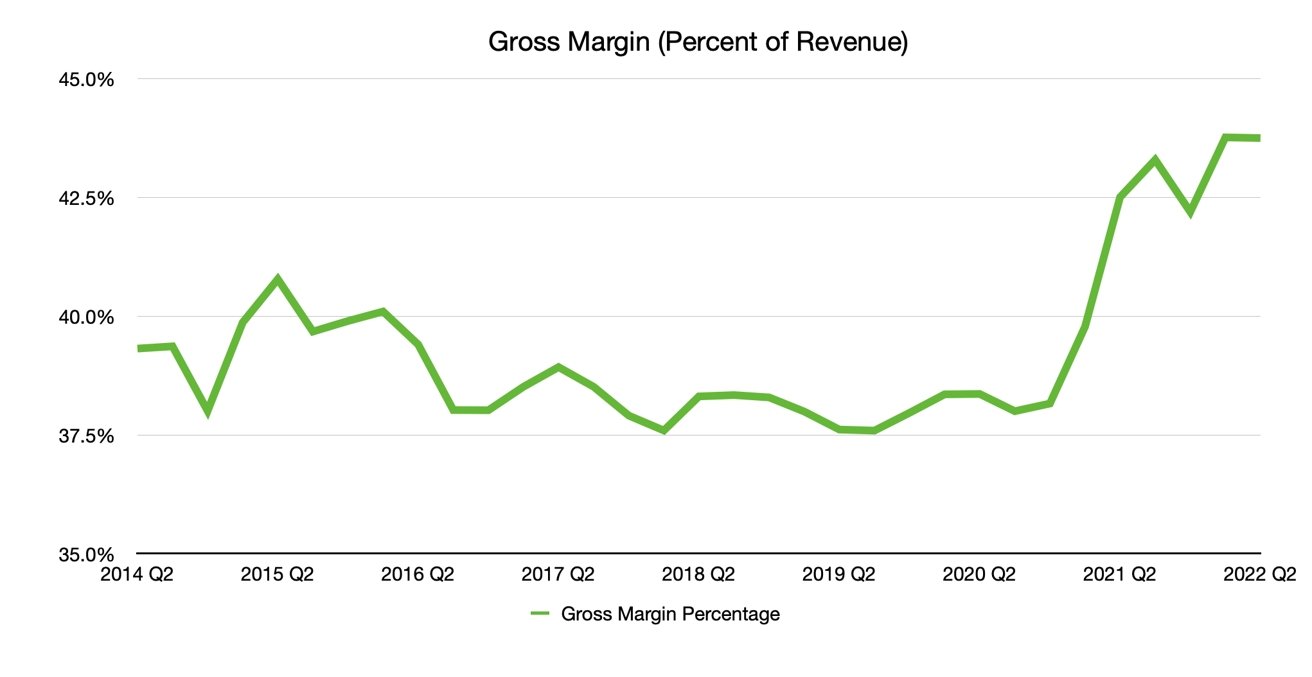 The gross margin is only slightly down from the 43.76% Apple reported in its Q1 2022. That margin was among the highest that Apple has seen in recent years. 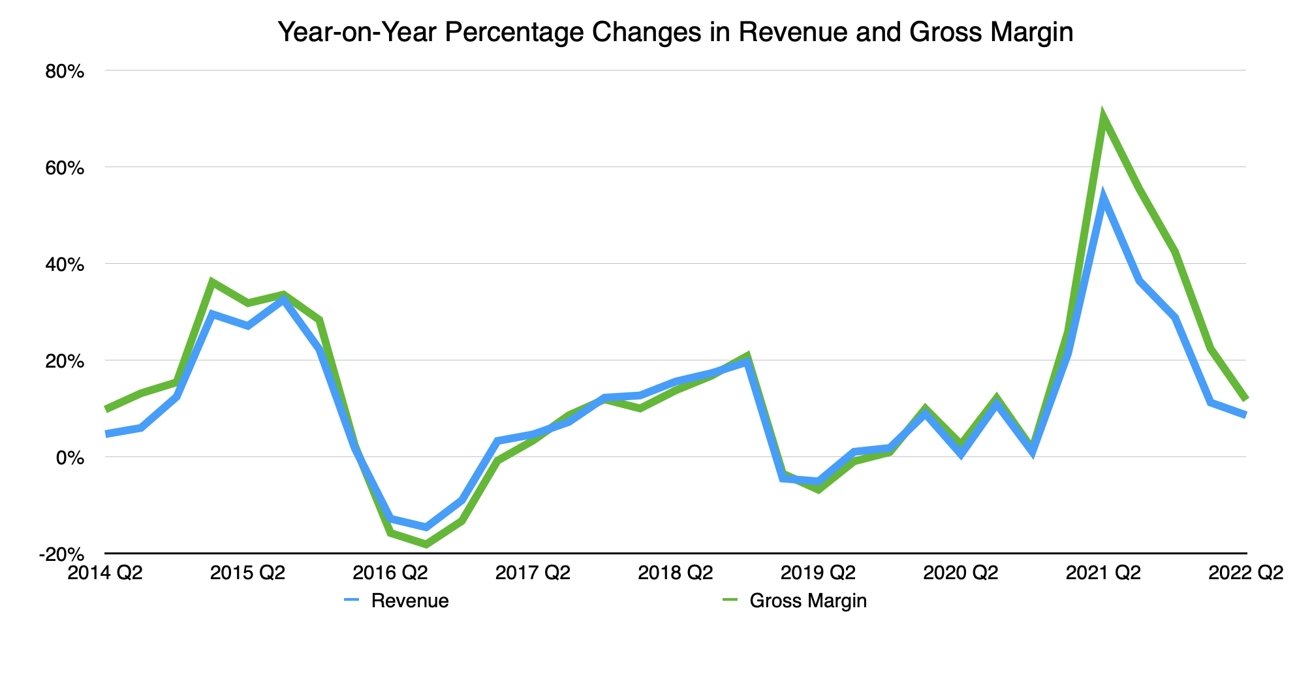 Gross margin generally follows Apple’s revenue quite closely, but it is pretty easy to see in the YoY changes that Apple’s increased it over the last few quarters.

Although iPhone revenue is technically down from the prior quarter, that’s largely because of seasonality. Many other product segments remained flat, while Services continued it steady climb.

Apple’s iPhone broke records during the quarter despite the lack of a flagship launch. The company did unveil a new iPhone SE, but many analysts believe that model isn’t selling as well as the company’s iPhone 13 series — which is still going strong months after launch.

Compared to past years, Apple’s iPhone revenue reached its highest number ever for a March quarter.

Apple reported iPad revenue of $7.6 billion, down slightly from $7.8 billion in Q2 2021. That continues a trend set during the first quarter of 2022, in which the iPad saw a decline in revenue. Apple says the tablet is supply constrained, which could explain the drop in sales.

Apple’s Mac revenues during the March quarter hit $10.4 billion, up from $9.1 billion in the year-ago quarter. The quarter marked the first full fiscal period of sales for the 14-inch MacBook Pro and 16-inch MacBook Pro. Apple also released a new Mac Studio in Q2 2022.

Apple’s Wearables, Home, and Accessories unit is continuing its climb with $8.8 billon in revenue during Q2 2022 — a rise from the $7.8 billion in Q2 2021. As with its MacBook Pro models, Q2 2022 was the first full quarter of availability for Apple’s third-generation AirPods

Services is also showing no signs of slowing. The segment has seen quarter after quarter of continuing growth, and Q2 2022 is no different. Apple reported Services revenue of $19.8 billion during the quarter, up significantly from the $16.9 billion in the year-ago period.

On a territorial basis, Apple’s revenue gains are spread out across the globe, though with one exception.

The operating segments lined up with historical performance, with pretty much all regions seeing a seasonal decline in revenue. The America’s remained Apple’s largest source of revenue, with Europe in second place and China in third. Japan actually ranked fourth in the quarter, ahead of the Rest of Asia Pacific.

The 13 best online teaching tools and gear in 2022

Pixel Watch may have cellular service and all-day battery