Apple is bringing Quick Notes to the iPhone with iOS 16 — sort of. Here’s what you get, what you don’t, and how to use it all.

Introduced in iPadOS 15 and macOS Monterey, Quick Notes were a transformative addition to Apple Notes. Suddenly Apple Notes felt like it was part of every app, every document, and every website you used because you could so very swiftly scribble down notes anywhere.

Over time it did become clear that the feature works best on the iPad. There with your finger or the Apple Pencil, you could always swipe up from the bottom right of the screen, write or read a note, then push it back out of the way again.

With the Mac, you clicked in the bottom right corner and it all worked the same way, just somehow not as consistently or conveniently as on the iPad.

But it was still better than on the iPhone which officially did not support Quick Notes. There was a workaround to get some of the features and in truth, iOS 16 has built on those workarounds rather than really adding the full Quick Note experience.

What you don’t get with Quick Notes on iPhone

There are two issues with the new iPhone implementation of Quick Notes. One is how you start a Quick Note, and the other is what information is automatically included in one when you have started it.

Both issues are a pain, but the one that will stop you using Quick Notes on iPhone concerns getting into a new or existing note. You have to forget all the swiping up and pushing away that’s on the iPad version, because there is nothing like that on the iPhone.

Instead, you have to use a more clunky method. When you do, if you open a Quick Note while you’re on a website, the note is supposed to become associated with that site. Next time you visit it, the Note should unobtrusively pop up to show you it’s available.

In iOS 16, that works with websites, but not for any documents or apps as it does with macOS Monterey and iPadOS 15. And then regardless of its current limitations, Quick Notes now offers two ways to start a note.

You can do it from Control Center, or from within any app. 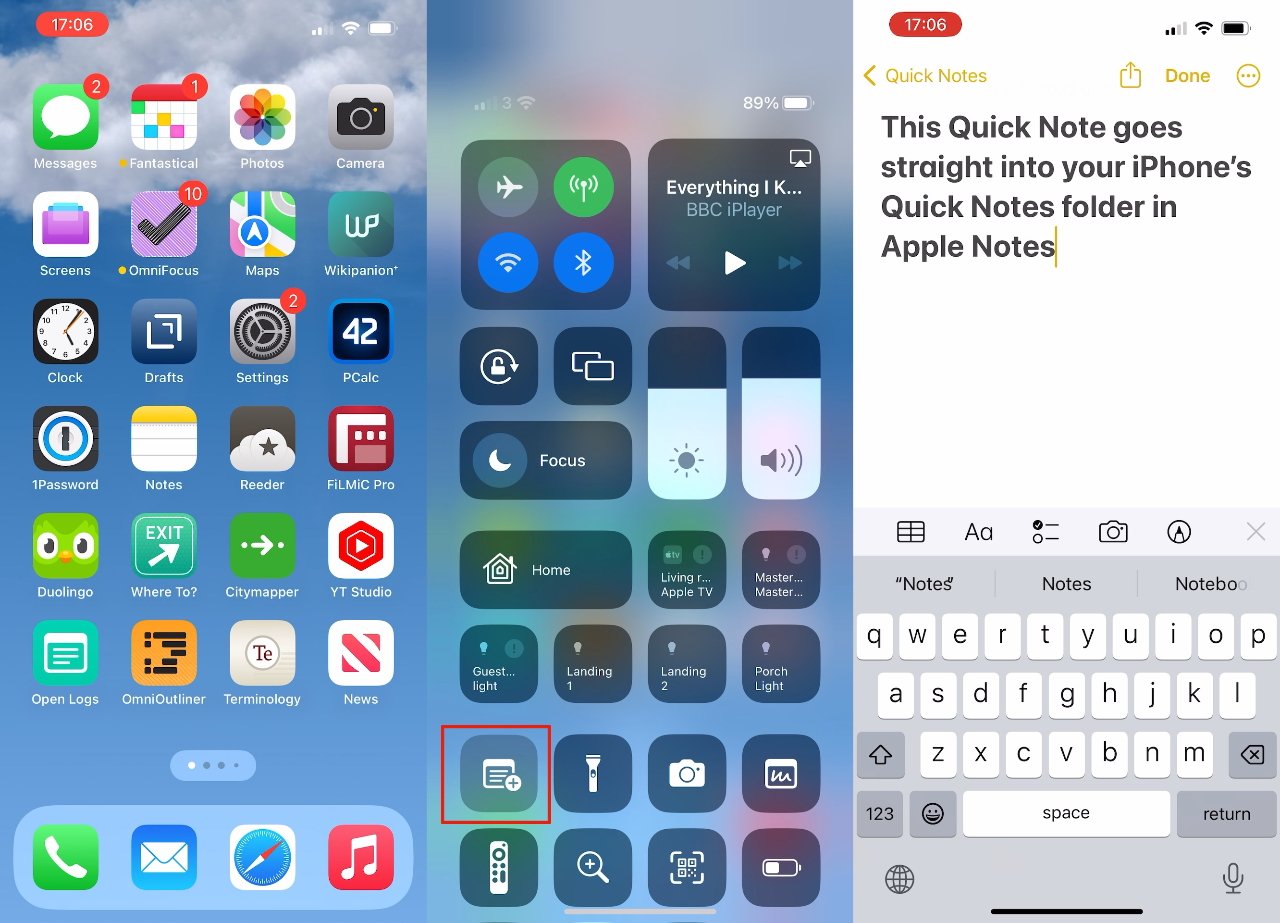 How to start a Quick Note from Control Center

Swipe down to open Control Center and look for a Notes icon. The icon shows a rectangular page with lines and a plus symbol at bottom right.

Apple has changed what features automatically go in Control Center and it may do so again before the public release. So the Notes icon may or may not be there, and if it isn’t, you have to set it up.

Dragging an Included Control vertically up the list rearranges where it will go in the rows and columns of Control Center. You can’t drag it to the top, Control Center will always have Apple’s main controls there, but generally the higher you go, the better.

That’s because it’s very easy to end up with more controls than can be shown on your iPhone screen. When that happens, you tend not bother scrolling down.

And Quick Notes work best when they are right at your fingertips, easily able to start and finish as you need them.

How to start a Quick Note from an app

With some apps, it’s called New Quick Note, while with others it’s Add to Quick Note. It gets called “Add”, even if you don’t have any others. And even though there is currently no way to actually add to an existing note.

If you create a Quick Note from an app, you end by pressing the Save button. When you do it from Control Center, the same button is Done instead.

The workaround to get some of the functionality from Quick Notes in iOS 15 was to instead use what Apple sometimes calls Instant Notes. They’re not instant, in fact they take exactly as long as the new Quick Notes do in Control Center.

They took the same time to use, they were set up the same way as Quick Notes are now. And in every way bar one, they worked like Quick Notes.

It’s the every way bar one part that used to be a little disappointing. If you used Control Center for this in iOS 15, you did quickly create a note in Apple Notes, but it wouldn’t go into the Quick Notes folder.

Instead, it went wherever your last note did. Sometimes that made it hard to find later, and always it was less convenient than having one central place for these jottings.

What Apple has chiefly done with Quick Notes in iOS 16 is make it so that if you use Control Center, the note you make does now go into that Quick Notes folder with the rest

It’s the same with making a Quick Note from inside an app. Regardless of what app it is, when you choose Share, Add to Quick Note, the note goes into the Quick Notes folder.

Problems with Quick Notes from apps in iOS 16

You can create a Quick Note, or several if you want, right from within any iPhone app. The problem comes with what you expect to find in that note beyond any typing you add.

On the Mac and the iPad, starting a new Quick Note means the device intelligently adds a link to the website or document you’re reading as you make notes. On the iPhone, it looks as if that should happen too, but it’s far more limited.

Even though you access this feature via the same Sharing option in any app, currently it appears to only be working in Safari. 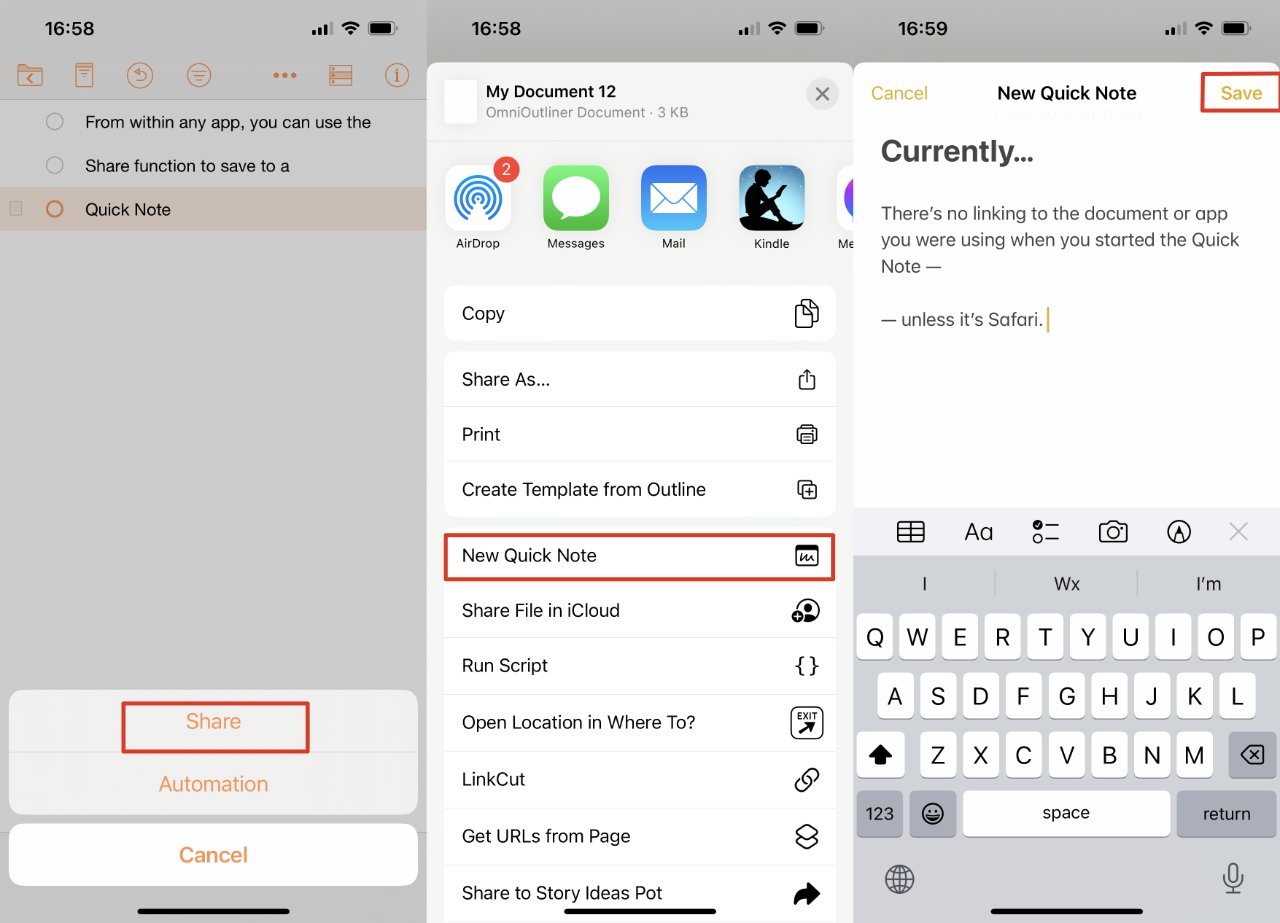 The problem of it seemingly not working with anything but Safari may change as the beta progresses. What will hopefully also change is how you read the these notes back later.

Just as with the iOS 15 versions, the idea is to first be certain of being able to capture an idea for ever, and very fast. The new Quick Notes for iPhone does that well.

It’s less good on the speed of looking up previous notes. On the iPad, you can swipe back and forth, but so far on the iPhone you have to read them by going to the Quick Notes folder.

Still, even without related previous notes popping up when you get to a particular website of your choosing, the new iPhone Quick Notes feature is good.

It’s not as good as on the iPad. But within moments of using Quick Notes on an iPad, you wished Apple would bring it to the iPhone. And now the company has.