Apple’s WWDC 2022 keynote saw it roll out M2, the first of a second generation of Apple Silicon chips. Again, Apple decided that the first wave of devices using it should be on the value-end of the catalog, and introduced a new MacBook Air alongside an updated 13-inch MacBook Pro.

With the shift to M2, the 13-inch MacBook Air gains a few performance tweaks that can make it an attractive proposition for those working in video. Some may even consider it a cheaper alternative to buying a 14-inch MacBook Pro.

Of course, the differences between the two models are more than just display size and chips, with many other factors to consider when buying a MacBook.

As you would typically expect between MacBooks with different sizes in their name, there will be a distinct sense of physicality between the two models. Both benefit from a nice, flat and practical design, complete with aluminum enclosures and clean lines, but size plays a factor.

The 14-inch MacBook Pro packs a 14.2-inch display but with relatively thin bezels, which helps dictate the size of the notebook. It measures 12.31 inches by 8.71 inches and 0.61 inches thick. 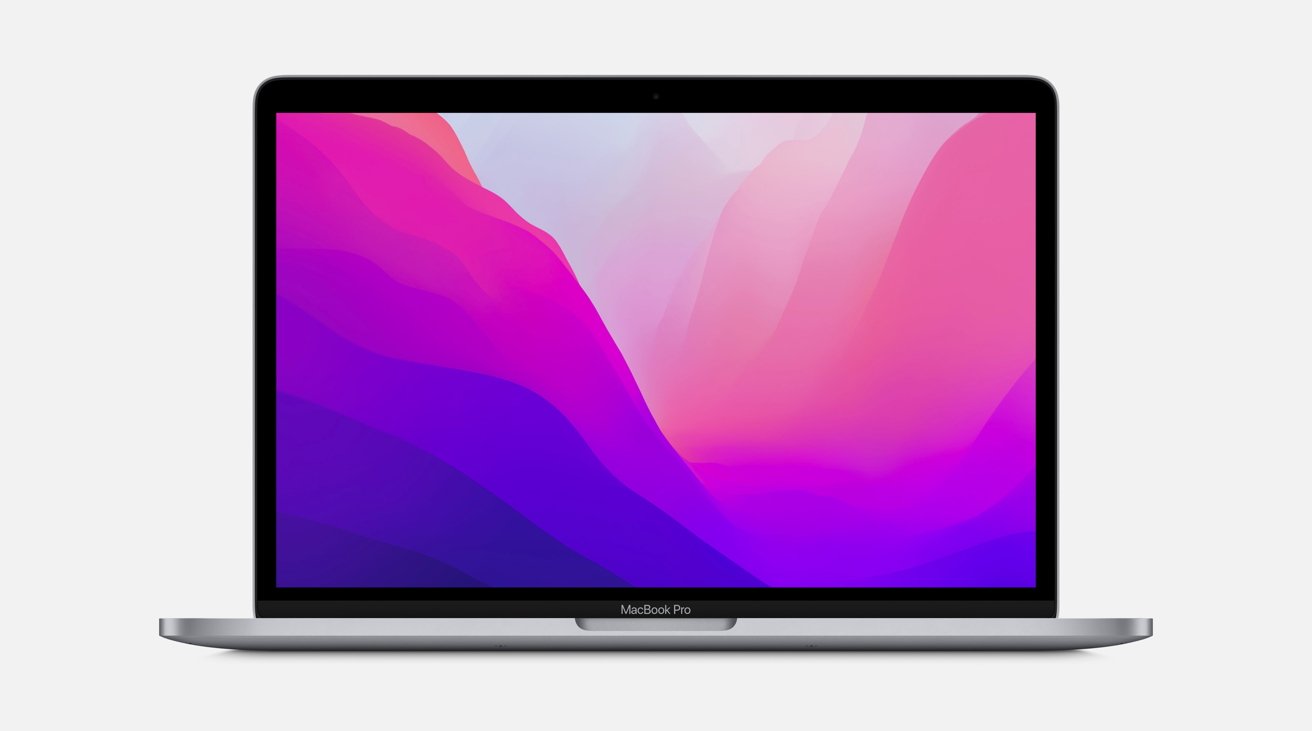 The 13-inch MacBook Pro will look very familiar to some users.

The 13-inch model has a 13.3-inch screen, as well as thicker bezels. Its footprint of 11.97 inches by 8.36 inches isn’t that much shorter or wider than its 14-inch counterpart, and it matches the thickness at 0.61 inches.

For weight, the physically bigger 14-inch model is also heavier, at 3.5 pounds to 3 pounds for the 13-inch model.

Apple has used a 13.3-inch display on the 13-inch MacBook Pro for quite some time, with relatively few changes over the years.

When the MacBook Air has been overhauled to become more like the 14-inch MacBook Pro in aesthetic, you would think that Apple would give the 13-inch model the same courtesy. Unfortunately, Apple decided to continue the tradition.

The usual 13.3-inch display is in use, with its typical resolution of 2,560 by 1,600 and a pixel density of 227ppi. There are thick bezels on each side and plenty of space at the top for the camera to fit in without intruding on the display.

The design does incorporate a notch at the top for the camera due to the thin bezels, and a controversial one at that. However, since this eats into screen estate used by the menu bar and is hidden by turning nearby screen sections black when an app is used full-screen, it’s not a big problem for users.

Both screens have Wide Color (P3) support and True Tone, but the 14-inch pulls ahead in a few areas. 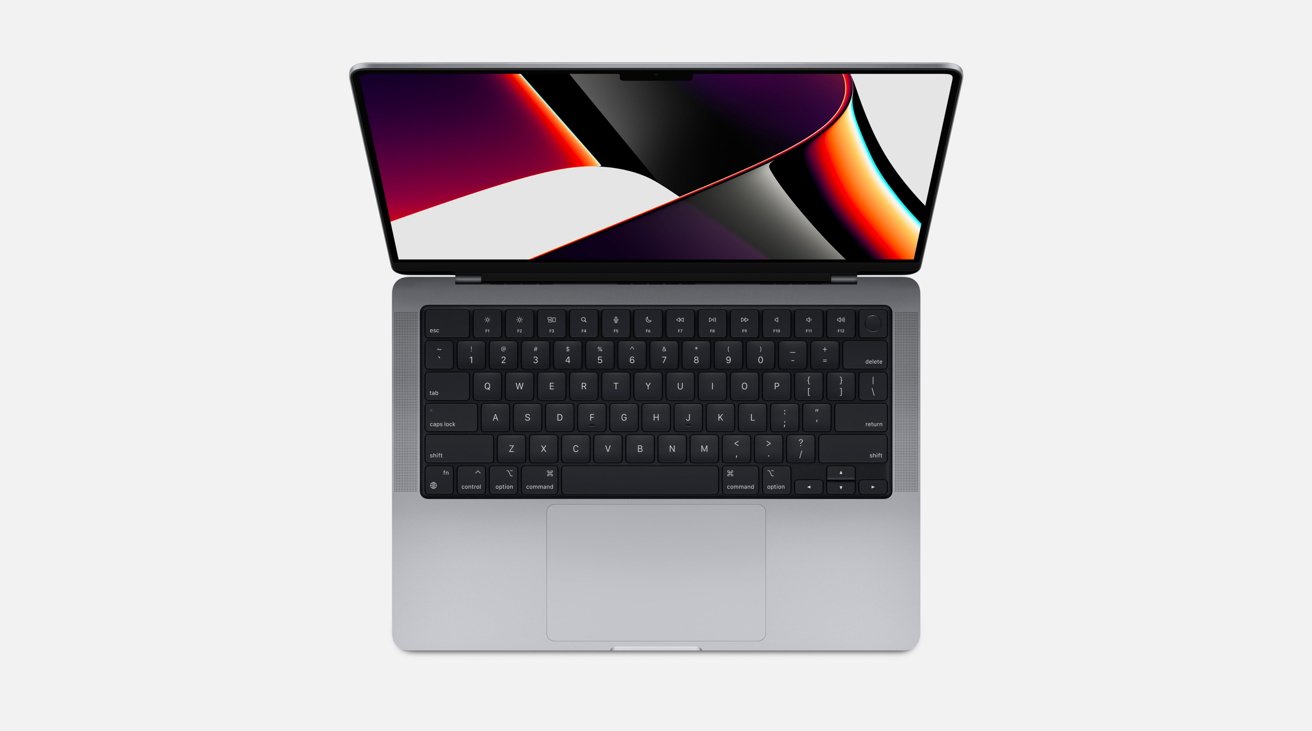 The 14-inch MacBook Pro has more keys for its keyboard, but it retains Touch ID.

The larger model uses mini LED backlighting versus LED for the 13-inch model. This change enables higher contrast levels to 1,000,000:1 and more vibrant imagery in the 14-inch model.

It’s also brighter at 1,000 nits in typical full-screen usage and up to 1,600 nits at its peak for HDR content. The 13-inch MacBook Pro’s display only manages 500 nits.

Then there’s ProMotion, Apple’s adaptive refresh rate technology that can help save battery life and improve animations. That ProMotion support means the 14-inch model’s screen can go up to 120Hz, while the 13-inch can go up to 60Hz.

At first blush, the M2 is an improvement to the Apple Silicon line, with it heralding the start of a new generation of chips. As analogous to the M1, the M2 is very similar but also better in several ways.

For example, it uses the same 8-core arrangement as the M1, of 8 cores evenly split between performance and efficiency cores. Except the M2 is faster than the M1 by 18% for relative power consumption levels.

There’s the same 5nm foundry process and the similar 16-core Neural Engine, but there are some bigger changes as well.

The Unified Memory returns for M2, but the memory bandwidth is up from 68.26GB/s in the M1 to an even 100GB/s. The memory capacities have also been boosted, so a 24GB variant joins the 8GB and 16GB options.

Then there’s the Media Engine, an element introduced in the M1 Pro and M1 Max to handle video encoding and decoding, including ProRes encode and decode engines. It wasn’t available on the M1, giving the M2 a giant leap forward.

The memory options are also larger, with the Pro offering 16GB or 32GB versions and the M1 Max going for 32GB and 64GB. The memory bandwidth is also much higher, at 200GB/s on the Pro and 400GB/s on the Mac. 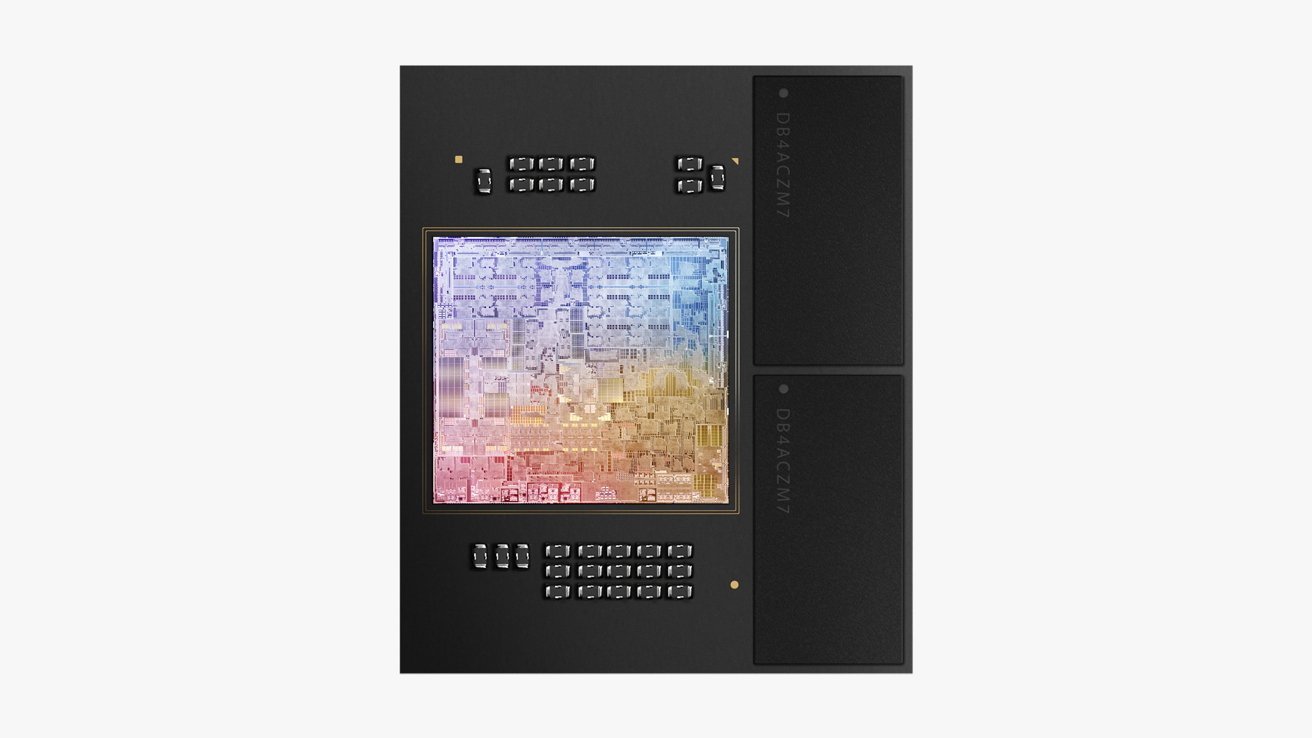 The Pro has the same Media Engine arrangement as the M2, but the Max adds in double the video encode engines and two each of ProRes encode and decode engines.

As for how this would affect performance, we can compare the initial benchmarks of the M2 on Geekbench against the other chips.

For Geekbench’s single-core test, the M2 reportedly scored 1,869, outpacing the 1,738 and 1,747 results for the Pro and Max. This is likely due to the higher-performance cores in the M2.

The M2 13-inch MacBook Pro has a 10-core Apple-deigned GPU. Apple claims the M2 GPU offers a 25% higher graphics performance than the M1 at the same power level, rising to 35% at maximum power.

Typically, the more cores you have, the better for performance, and for the moment, it’s a maxim to follow until complete benchmarks are produced.

One unusual area that wasn’t updated in the M2 is external video support. The 13-inch MacBook Pro can handle only one external display, with a maximum resolution of 6K and running at 60Hz.

Just as it didn’t update the display, Apple has kept the built-in camera the same in the 13-inch MacBook Pro. The 720p FaceTime HD camera is a very familiar sight, but a disappointing one since the MacBook Air saw an update to the 1080p FaceTime HD camera.

The 14-inch MacBook Pro does use that 1080p FaceTime HD camera. 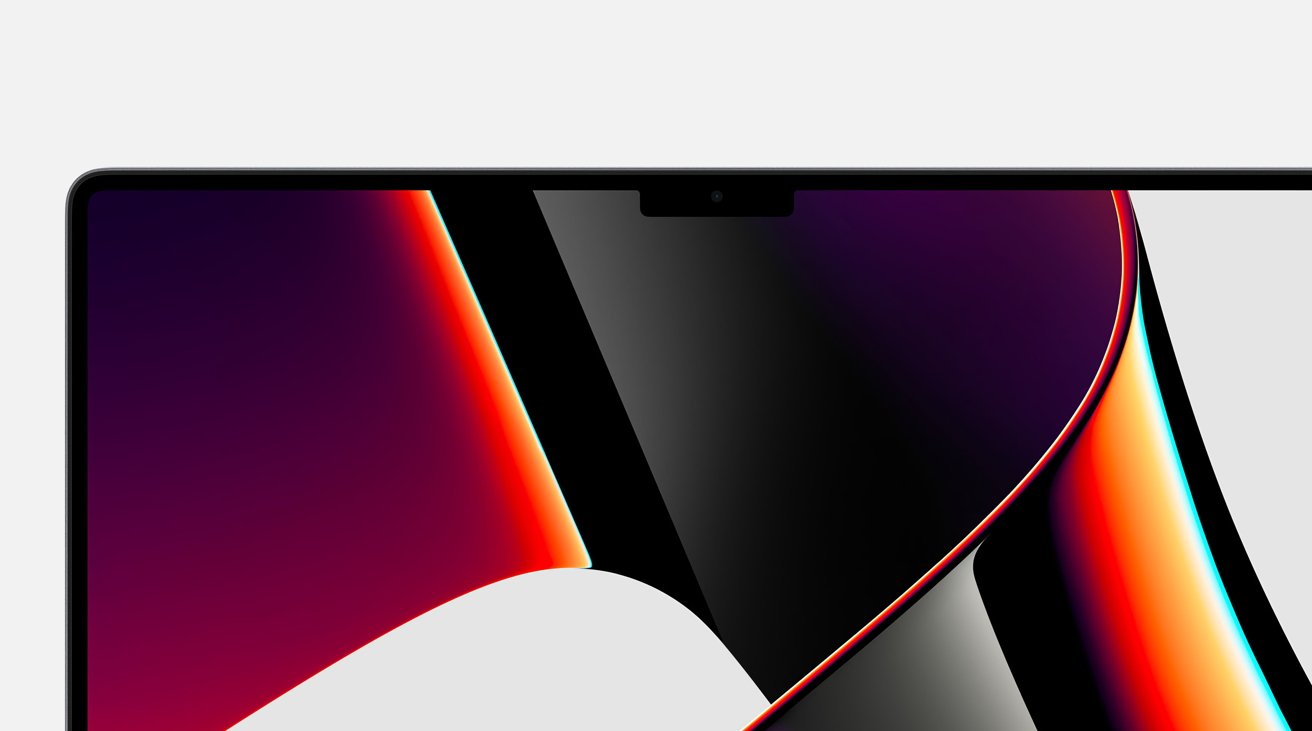 The 14-inch MacBook Pro uses a notch in the display, but it’s less of a problem than people may think

All benefit from the image signal processing and computational photography knowhow Apple has gathered to improve the picture, but the resolution difference will undoubtedly be felt.

This may not necessarily be a problem for some users, as Apple is bringing in its Continuity Camera feature, enabling an iPhone to be used as a webcam. This could provide considerably better picture quality and other extra benefits, which could make the webcam argument moot down the line.

Connecting the MacBook Pro to other devices is considerably easier for the 14-inch MacBook Pro than the 13-inch model because it has far more ports.

The 13-inch MacBook Pro offers users three physical ports: a pair of USB4/Thunderbolt 3 ports on one side and a 3.5mm headphone jack.

By contrast, the 14-inch MacBook Pro spoils you for choice. For a start, you have two Thunderbolt 4 ports on one side, one on the other, and the headphone jack. 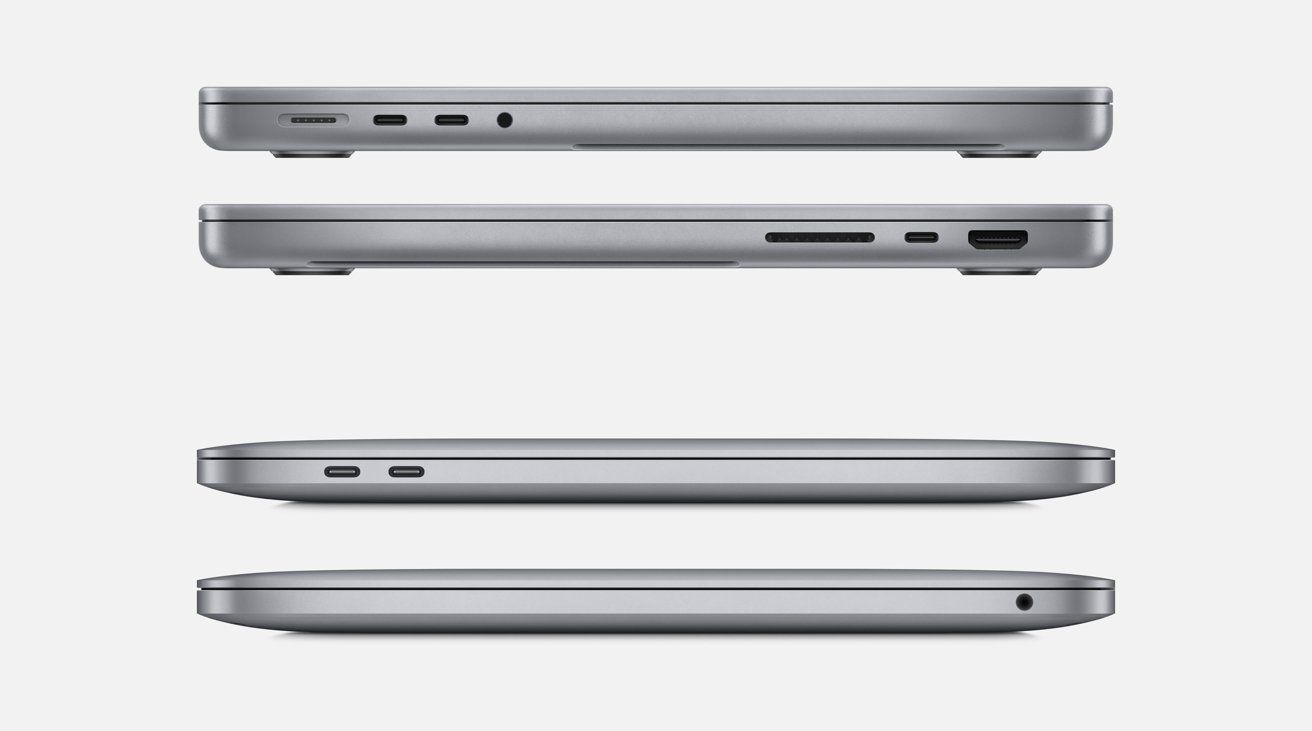 Then there’s the built-in SDXC card slot, an HDMI port, and a MagSafe 3 connection for charging. That latter element is a great addition since you don’t need to sacrifice any of your data-centric ports to recharge the 14-inch MacBook Pro unless you’re using a dock with sufficient power delivery.

On the wireless side, both MacBook Pro models have Wi-Fi 6 support and Bluetooth 5.0.

Apple claims the 13-inch MacBook Pro’s 58.2-watt-hour lithium-polymer battery can last for up to 20 hours of Apple TV app movie playback, as well as up to 17 hours of wireless web access.

The 14-inch MacBook Pro can manage up to 17 hours of Apple TV app movie playback using its 70-watt battery and up to 11 hours of wireless web access.

While there’s a lower usability time for the 14-inch model’s bigger battery, each is still capable of all-day usage.

For playing music back, the 13-inch MacBook Pro has stereo speakers. The 14-inch instead relies on a high-fidelity six-speaker sound system with force-canceling woofers.

The microphone situation is also the same, with each using a “studio-quality” three-mic array with directional beamforming and a high signal-to-noise ratio. 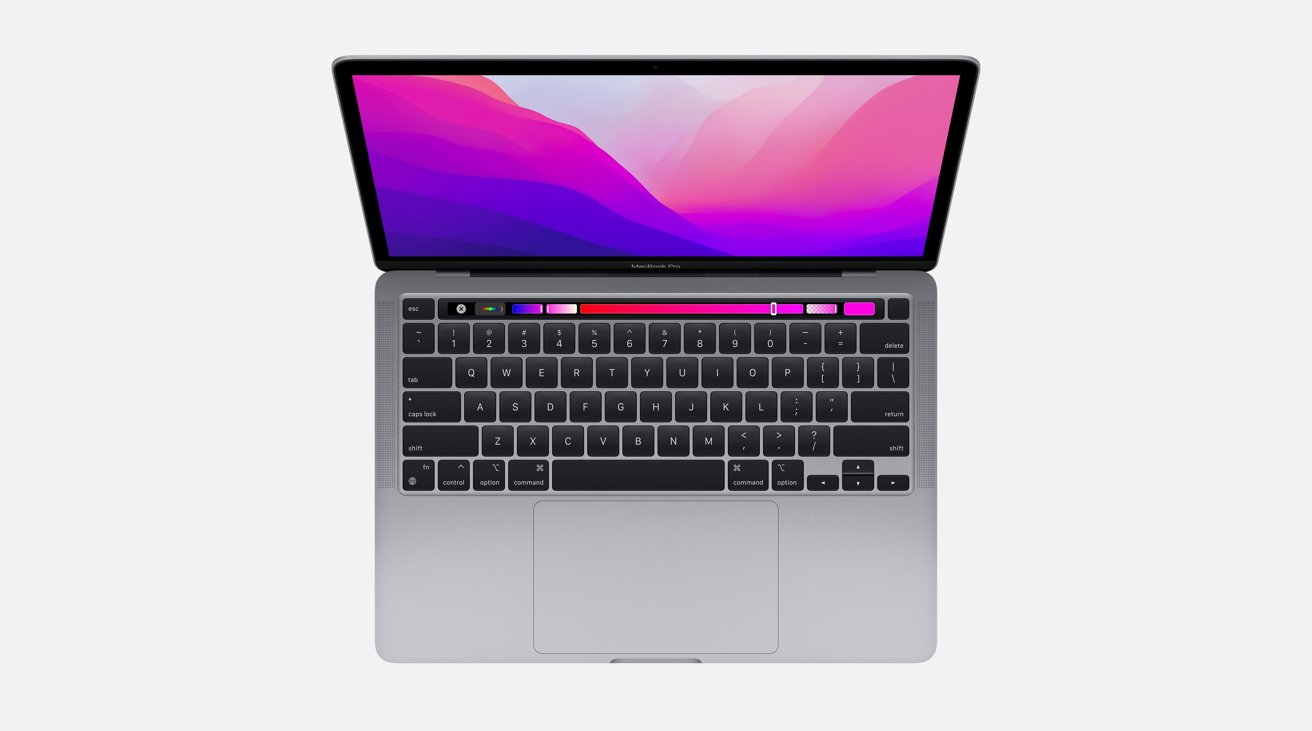 The 13-inch MacBook Pro keeps the Touch Bar for one more cycle.

Going for a 10-core CPU version immediately ups the base storage capacity to 1TB, with options to move to 2TB, 4TB, and 8TB.

Both MacBooks have a Backlit Magic Keyboard with an ambient light sensor and a Force Touch trackpad. However, how they are implemented is slightly different.

Apple dropped the much-derided Touch Bar in its 14-inch MacBook Pro, in favor of 12 full-heigh function keys, with it being a 78-key or 79-key keyboard, depending on the region. Touch ID is still available via a dedicated key in the corner.

The 13-inch MacBook Pro has a 65-key or 66-key keyboard, again depending on region, but it retains the Touch Bar and Touch ID.

The new 13-inch MacBook Pro starts from $1,299 at its cheapest price, including 8GB of memory and 256GB of storage. 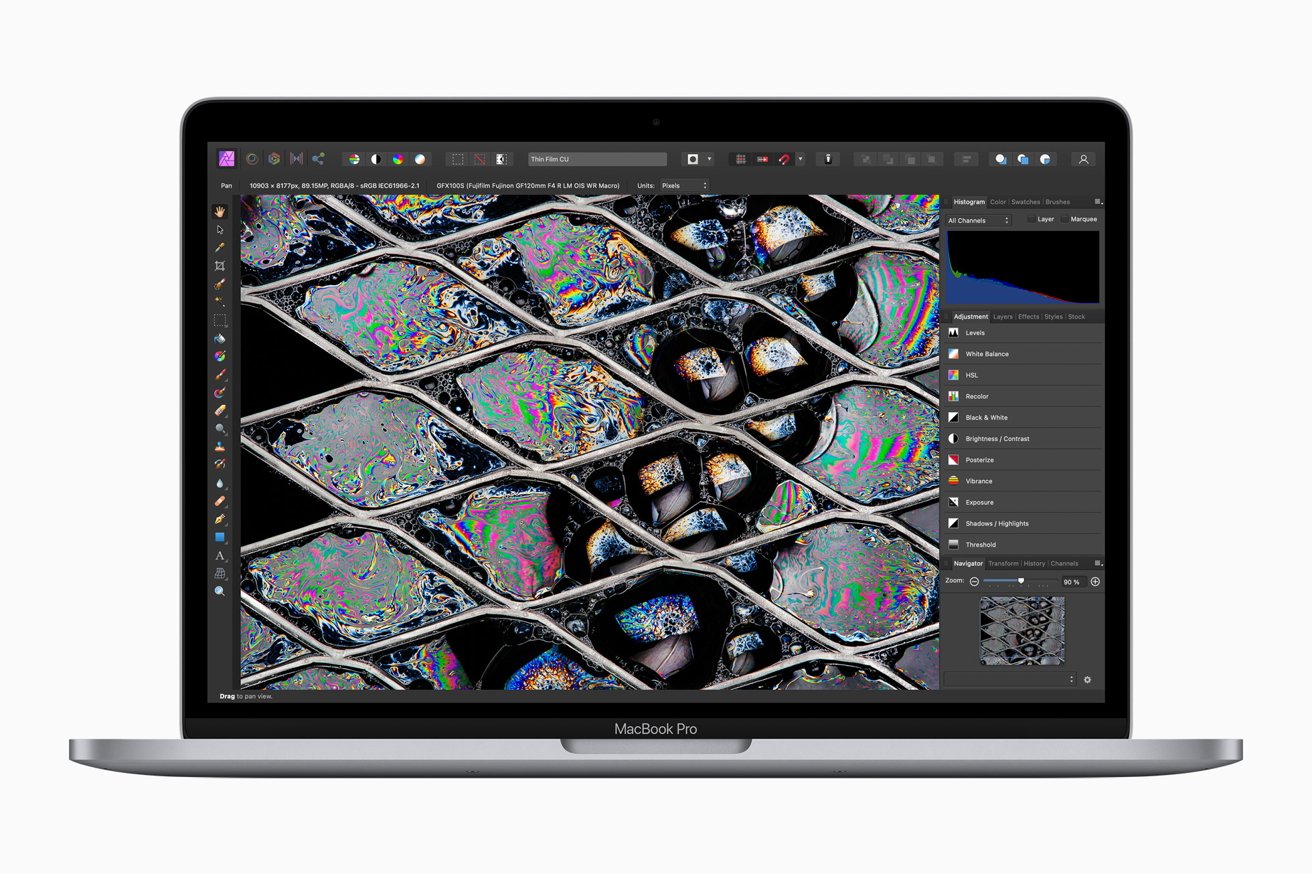 The 13-inch MacBook Pro is now more powerful with M2.

The 8-core CPU M1 Pro ships with the 67W power adapter, but you can upgrade to the 96W version for an extra $20. All 10-core CPU versions ship with the 96W by default.

Just because it’s updated the SoC doesn’t mean the 13-inch MacBook Pro is the same sort of device as the 14-inch version. The chip brings some niceties, but it’s not a barn-storming chip.

The biggest draw for the 14-inch MacBook Pro is performance, and for video editors, the all-important Media Engine. You now get this in the 13-inch model, which is a plus, but only a minor one.

We know the 14-inch MacBook Pro is more expensive, but at comparative specifications, the 13-inch model is only $300 cheaper in general.

For that $300 more, the 14-inch MacBook Pro gives you more CPU and GPU cores, a bigger screen with a better webcam, a better keyboard, a beefier sound system, and a lot more usable ports.

While the M2 MacBook Pro 13-inch doesn’t go on sale until July 2022, there are substantial discounts in effect on the 14-inch MacBook Pro, putting it closer in price to the M2 models. Save up to $300 instantly on every 14-inch MacBook Pro configuration at Adorama with this cost-saving activation link and promo code APINSIDER. AppleCare is also $60 off with the same coupon code. Need help with the deals? See this guide for step-by-step activation instructions.