At a length conference in China, Xiaomi presented the Xiaomi 12S series. This is the first technology upgrade conference for a Xiaomi smartphone. It started with a detailed overview of the first technology upgrade – the cameras. Xiaomi has combined efforts with Leica specialists to offer unprecedented experience in shooting photos and videos with the Xiaomi 12S series. The second technological upgrade is moving to Qualcomm’s Snapdragon 8+ Gen 1 chipset. The upgrade is not only in offering a higher CPU clock rate but also better thermal management. The 12S models have an ANTuTu score of more than 1 million points. A third technological upgrade is about the battery. It is not only about battery capacity but also thermal management during heavy load times and battery charging. In many case scenarios, the Xiaomi 12S models prevail over the competition in terms of battery temperature management. Another upgrade is experienced through the design and the end product is compact, stylish, and comfortable to hold with one hand.

The Xiaomi 12S Pro has a 2K AMOLED LTPO 2.0 display with VRR from 1 Hz to 120Hz. The device has a 10800 sq.mm. cooling system, of which 2900 sq.mm. are for the vapor chamber. The camera department of this model comprises a 50MP Sony IMX707 main shooter with a 1/1.28″ optical format and 1.22 micron-pixel size which increases to 2.44-micron pixels with 4-in-1 pixel binning. The main camera is aided by PDAF and 4-axis OIS. It is adjoined by a 50MP periscope telephoto lens with a 50 mm focal length equivalent. The third rear shooter is a 50MP ultra-wide unit. Power is supplied by a 4600 mAh battery with 120W fast charging support, 50W wireless charging, and 10W reverse wireless charging.

The Xiaomi 12S Ultra uses an aluminium unibody frame, a 23K gold circle frame for the camera module, and faux-leather texture on the back for a premium feel. Moreover, the device is resistant to water splashes, dust, and dirt. The main camera takes up the center of the module and the bigger circle around it houses the adjoining shooters and LED flash. The body is available in black and verdant green colors. The front is adorned with the same 2K 6.73″ AMOLED display found on the Pro version with HDR10+, Dolby VIsion certification, 1500 nits of peak brightness, LTPO 2.0 backplane, 1-120Hz VRR, 10-bit gray depth. The Snapdragon 8+ Gen 1 chipset is aided by an all-new 3D cooling system that offers 100% improvement over VC cooling. The battery has a 4860 mAh capacity. It is aided by a Xiaomi Surge P1 and a Xiaomi Surge G1 charging chip – a technology used in EVs applied to smartphones. This is a silicon-oxide anode technology of the battery allowed for a larger battery capacity, while retaining a body that’s thin enough. It supports 67W fast charging, 50W wireless charging, and 10W reverse wireless charging.

The Xiaomi 12S is priced as follows:

The Xiaomi 12S Pro is priced as follows:

The Xiaomi 12S Ultra is priced as follows: 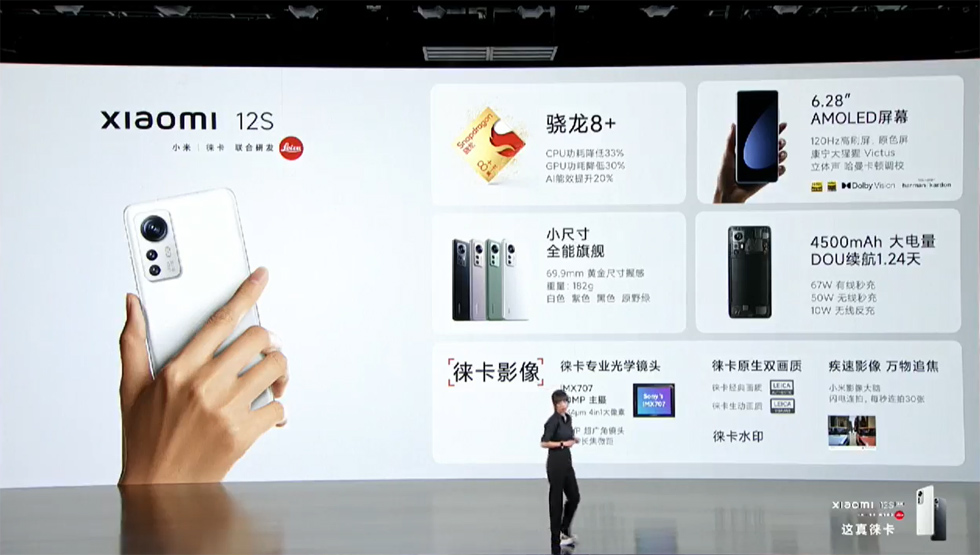 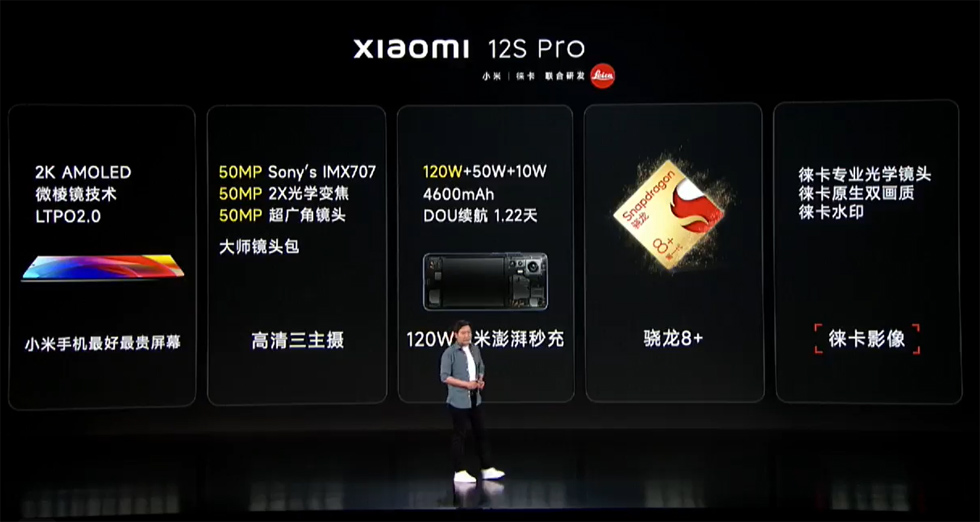 The Xiaomi 12 Pro Dimensity Edition has been unveiled after Xiaomi received plenty of requests for adding a Dimensity model to its Xiaomi 12 series. Hence the 12 Pro DImensity Edition appeared based on a MediaTek Dimensity 9000+ chipset with which the device has achieved 1M+ score on AnTuTU. This smartphone has a 6.73″ 2K AMOLED LTPO 2.0 display with VRR from 1 Hz to 120Hz. The camera department of this model…

The Xiaomi Civi 1S has been just unveiled in China and looks like it’s almost a twin of its predecessor – the Xiaomi Civi. The smartphone is built around a 6.55-inch OLED display with a 10-bit color bit depth support, Dolby Vision certification, 120Hz refresh rate. Just like the first Civi smartphone, the 1S has an extremely thin and lightweight body with a 6.98 mm thin profile and a weight of 166 g. Still, it…

Our POCO X4 Pro 5G full review is now ready. As usual, we provide you with detailed information about every aspect of the smartphone, including various measurements, tests, lots of photos, graphs, comparison tables, and screenshots. If you want to acquaint yourself with this smartphone in detail, here are the separate pages from our in-depth review: POCO X4 Pro 5G specifications and unboxing POCO X4 Pro 5G design…

The Black Shark 5 mobile gaming series comprises three models. The vanilla one is the Black Shark 5 and is already on sale in China priced at CNY 2,700 for the base version. Available in black, gray, and white colors, this smartphone features a 6.67-inch AMOLED display with an FHD+ resolution, 144Hz refresh rate, 720Gz touch sampling rate, 8.3 ms response time, and magnetic shoulder buttons. Its camera department…

Earlier today, Redmi India unveiled a new budget smartphone with a very familiar name – Redmi 10. Because there are two other Redmi 10 models on the market, we named this one Redmi 10 India. Its model code is MZB0B6WIN. The device is available in green, blue, black colors and is built around a 6.71-inch IPS display with a resolution of 720 x 1650 pixels. It is powered by a 6000 mAh battery with 18W fast charging…

The much anticipated Redmi K50 Pro+ will be unveiled on March 17. According to the official teasers, the model will pack a MediaTek Dimensity 9000 chipset. The SoC is based on the 4nm production node with ARMv9 ISA, Cortex-X2 CPU cores with 40% increased performance over the previous generation, and a 10-core Mali-G710 GPU for an 85% increased performance. The Dimensity 9000 also arrives with APU 5.0 offering a 400%…

Xiaomi has unveiled the Redmi Note 11 Pro+ for India, which differs in several aspects from the Redmi Note 11 Pro+ for China. First, the differences. The India model is based on a Snapdragon 695 chipset. The 108MP main camera is the same but video capture is limited to FHD, not 4K as on the model for China. The color options are limited to three, instead of four. The network bands are suitable for the India market…

It has been officially confirmed that the Xiaomi 12 series will be unveiled in a week’s time – on March 15th. The series will comprise the following trio: Xiaomi 12 Xiaomi 12X Xiaomi 12 Pro

Xiaomi has launched the Redmi Note 11E Pro in China. This smartphone is based on a Snapdragon 695 chipset with a 2.2GHz octa-core CPU and an Adreno 619 GPU. It is paired with 6GB/8GB of LPDDR4X RAM and 128GB/256GB of UFS 2.2 storage. The device is built around a 6.67-inch AMOLED display with an FHD+ resolution, 120Hz refresh rate, 1200 nits of peak brightness. The camera department houses a 16MP selfie snapper with…

Xiaomi has unveiled the Redmi K50 Gaming Edition for the Chinese market. Featuring a distinctive gaming-style design, the device arrives in four colors – black, blue, gray, and Mercedes AMG PETRONAS F1 edition. Tactile shoulder triggers for convenient playing are also included. The model is based on a Snapdragon 8 Gen 1 chipset with 8GB or 12GB of LPDDR5 RAM and 128GB or 256GB of built-in memory. The latter cannot…

Smartphones and gadgets
39 mins ago

Doogee V30 in for review, complete specifications and first

Smartphones and gadgets
7 days ago

Honor Magic Vs and Magic Vs Ultimate Edition are presented

Doogee V30 in for review, complete specifications and first

Honor Magic Vs and Magic Vs Ultimate Edition are presented

ZTE K98 is a tablet for government and enterprise use in